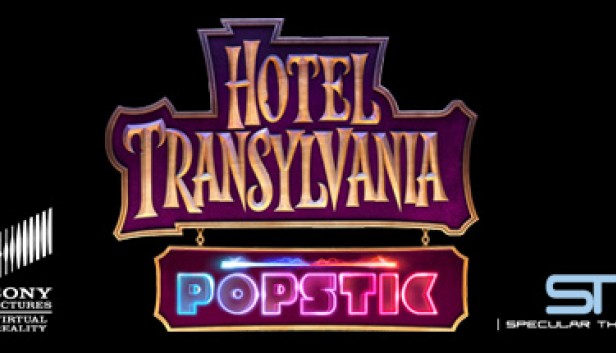 Hotel Transylvania Popstic is a super fun VR rhythm game where you move your entire body around to match fast-moving patterns of colorful orbs flying toward you with corresponding colors on each end of your Popstic or Wands. Connect the dots, ride the rails, or deactivate lasers without missing a beat. Watch out for obstacles! 2018 Winner for Best VR Game at Barcelona Games World. 2019 Winner for Best VR Game at VR Fest at CES. This game is packed with energetic songs, full body movement, special powerups, and bonus levels. KEY FEATURES - Featuring characters from the popular Hotel Transylvania movie franchise and premium gameplay. - Two ways to play (Wands or Popstic), 3 different levels of difficulty, 9 songs per level. - Hotel Transylvania's Griffin (the Invisible Man) guides you throughout the game with helpful tips and fun commentary. - Bonus, Fitness and Death Mode levels have been added for extreme gameplay. - Rack up combo points and high scores by correctly matching colors and beats. - Powerups have been added to allow you to slow down time, blast obstacles out of your way, and hit orbs more easily to score more points. - Full body movement. Quickly move your body up, down, or to the sides to get yourself thru the rotating obstacles safely by getting your head and controller thru without touching any lasers. Play the game in Wands mode using two Vive or Rift controllers. From the main menu inside the Hotel Transylvania lobby, tap the 'Controller' button on the left to set up your controller. Note: Popstic mode requires a Popstic accessory and does not currently work on the Rift (Vive only). Only choose Popstic if you have the Popstic accessory attachment. This is a prototype accessory. If you do not have this accessory, and would like to order one, please visit our website for more info. We also encourage you to make your own as needed and we welcome any feedback. The Popstic mode is optional and offers players an additional type of gameplay experience. The game is fun to play with and without the Popstic.

A new mysterious enemy threatens to tear apart the universe and only you can stop them! Doctor Who: The Edge Of Time lets players embark on an adventure through space and time. Travel across the universe, visit alien locations, pilot the TARDIS and solve the mystery of the controlling force behind the Reality Virus.

I Expect You To Die

Play as a secret agent armed with telekinetic abilities on a mission to stop Zoraxis, a nefarious global weapons and pharmaceutical corporation.

There is nowhere to run... and nowhere to hide as zombies climb up the walls hoping to satisfy their appetite for brains. The only way to survive: reload your guns, destroy all furniture in the room, grab them all, and throw anything you can find to take them down.. and we mean ANYTHING. Face off against starving zombies in high-rise buildings across the globe in the VR action defense game, Throw Anything! KEY FEATURES ㆍ Enjoy laying waste to fully destructible environments! ㆍ Throw any object within reach – humans included! ㆍ Take on 6 challenging stages about to be overrun by the zombie horde! ㆍ Defeat 5 mid bosses and 6 powerful “main” bosses! ㆍ Collect ancient relics to save the world! ㆍ Defeat zombies and get powerful weapons as rewards! ㆍ Test your limits at various difficulty levels! STORY The mysterious “Scientist X” has decided to play God – conducting secret, forbidden experiments in secluded laboratories throughout the world.. To conquer whole world by spreading zombie virus using ubiquitous cube.. However, five scientist who oppose X's terrible plan divide ubiquitous cube into 5 pieces and hid throughout the world and enraged mystery Scientist X invades the world using zombies to find cube! The world is quickly being overrun by these undead abominations – turning everyday peace into a never ending cycle of pain and suffering. Get secret missions from Secret Delivery Agency (SDA) and collect cubes to save the world from zombie horde!

Experience a new kind of immersive horror in Dreadhalls! You are trapped deep inside a massive dungeon. Explore it, survive it, and find a way to escape. Your only weapons will be stealth, your own courage, and a faint light. Dreadhalls is an intense and scary experience, not for the faint of heart. You have been warned!

Doctor Who: The Edge of Time (Arcade Version)

A new mysterious enemy threatens to tear apart the universe and only you can stop them! Doctor Who: The Edge Of Time lets players embark on an adventure through space and time. Travel across the universe, visit alien locations, pilot the TARDIS and solve the mystery of the controlling force behind the Reality Virus.

Budget Cuts 2: Mission Insolvency is a stealth action game built for the total immersion that only heavily spatial VR experiences can bring, bound together with an epic story, spine-tingling tension and a delicious blend of violence, tongue-in-cheek humor, and tacos.